Our Senior Director of Technical Center Americas, Ilyas Ayub, wrote an article for Battery Power Online in August 2018 that compares and contrasts Lithium vs. Lead-Acid (Pb) across a variety of portable, motive and stationary applications. This article was republished in October 2018 by Southern Oregon Business Journal. 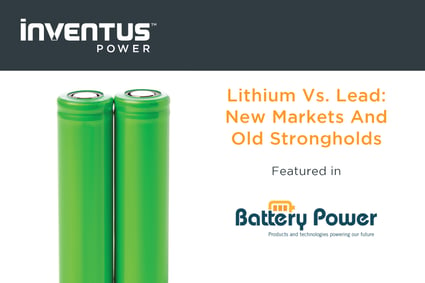 Let’s be clear, the Lead-Acid (Pb) battery is still the mainstay of many battery applications such as starting your car, backing up a server-farm or telephone system, maintaining an alarm system – the list is long. But Lithium-ion (Li-ion), the mainstay for portable devices, such as cell phones and laptops, is continuing to expand into new markets and applications – even those where Pb is king.

Pb offers many advantages for non-portable devices where size or weight are not critical factors. While it has low energy density, it features great power density at a very low cost. However, the maintenance and replacement costs of Pb are starting to become a hindrance to Pb’s continued dominance.
Lithium is more than twice the cost of Pb, but it has improved power capability and low-maintenance such that is has become more popular for in-rack backup for server functions such as memory storage. The reduced space, better heat tolerance, and high-power discharge capability out-weigh the added costs in mission-critical computing uses. Additionally, due to the recent push for electric vehicles around the world, the price point for Li-ion is starting to decrease.

For low-cost, but critical applications, such as starting your car, Pb-Acid will certainly remain the battery of choice. Sealed Lead-Acid (SLA) or Valve-Regulated Lead-Acid (VRLA) still command the majority of server and telecom backup systems along with flooded Lead-Acid, which can last up to 20 years when properly maintained.

As more devices become portable via the continued advancement of low-power electronics, Li-ion will continue to enable new applications. For truly portable devices, Li-ion has ruled for laptops and cell phones for many years, but is now expanding into “larger” portable devices such as lawn and garden tools. Soon enough, Li-ion will be seen more within the outdoor power equipment segment that includes mowers, chain-saws, etc.

Why Is Li-ion Continuing To Expand Into New Market Applications?

Li-ion enables new opportunities due to its benefits such as low weight, high energy and high power density. Just 10 years ago, the power tool market was dominated by Nickel-Cadmium (NiCd) batteries due to low cost and high-power delivery. Li-ion was a very expensive alternative such that many thought it would never be viable for power tools—particularly ones at consumer price points. But Li-ion enabled a new type of power tool: one which took advantage of a more efficient and more powerful motor at a higher voltage. Previous NiCd designs did not exceed 18V due to the weight of the battery, but Li-ion enabled 36V (and now higher) designs. Higher motor voltages are more efficient and more powerful such that now portable power tools could do things previously reserved for only plug-in AC-powered tools. DeWalt 36V and Milwaukee 28V started the trend which has continued to even higher voltages and more capable devices.