During the past few years, there has been an increase in demand for wearable devices from an audience both young and old. Some medical devices provide preventative functions, such as monitoring disorders, enabling early intervention and avoidance of complications. Other devices are reactive and can detect if an elderly patient has fallen, needs emergency assistance, has wandered outside a specific perimeter, or needs a reminder to take prescribed medications at the appropriate time of the day. Still other wearables allow consumers of all ages to monitor their own health and fitness, whether to help them lose weight, reach exercise/fitness goals or sleep better.

There are many examples of wearable devices that feature sensors. Some use “skin-friendly” adhesive while other examples are wristbands and shoe insoles that can measure the progress of patients and athletes. Examples of the functions include blood glucose meters, blood pressure meters, cardiac monitors and ECGs. What was once viewed as a “nice to have” device has now turned into a “must have” device to track, monitor and protect us in our everyday life.

Communication with the wearable medical device is typically a wireless telemetry function, which utilizes either Bluetooth, Wi-Fi or cellular data capabilities to sync data back to a centralized monitoring program. From a power consumption standpoint, the wearable device needs appropriate and adequate power to collect, process, and sync the functional data, as well as power a wireless transceiver.

There are several different means in which a wearable medical device can be affixed to a patient. Some are placed on the skin using adhesives or affixed to clothing with sensors attached to the body. Others are worn on the wrist (or chest) like a watch. The common theme with a wearable device and its rechargeable power source is it must be small and thin. For the rechargeable power source, the additional requirements usually include an irregular (and custom) shape, only a few millimeters in thickness, and potentially mounted on a curved surface. Given these constraints, the wearable device will typically be powered by a single cell, much like a cell phone. Most wearable devices utilize Lithium Polymer batteries, given their unique characteristics that will be outlined below.

Introduction to Lithium Polymer
Li-ion cells come in three basic form factors: cylindrical, prismatic and polymer cells. Cylindrical 18650 (18 mm dia. 65 mm length) cells are used not only in notebooks but also power tools, e-bikes, EVs and other industrial applications. Prismatic or rectangular shaped cells are made with Aluminum cans and are available in a myriad of sizes and are generally used in the same applications as polymer cells. Prismatic cells come in a variety of x,y footprints and with thickness typically ranging from about 4 mm to about 12 mm. Some of the most common footprints for prismatic cells are 34 by 50 mm, 60 by 80 mm, 38 by 64 mm with thickness ranging from 4 mm to 10 mm.

Lithium polymer cells, sometimes called laminate or pouch cells, are available in custom footprint sizes, which makes them appealing to wearable device manufacturers. They can be very thin or quite large depending on their intended use. The primary advantage of Lithium polymer batteries is the variety of form factors available. Polymer cells differ from prismatic cells in two key respects, one being the cell construction and the second being the electrolyte used. A polymer cell enclosure is an Aluminum foil in between two layers of polypropylene that is typically vacuumed sealed with the edges heat sealed. Additionally, the positive and negative terminals are tabs that protrude through the cell. The electrolyte is either a gel or polymer as opposed to the liquid electrolyte used in a prismatic or cylindrical cell. Cell capacities can range anywhere from 50 mAh for a small cell such as for a Bluetooth headset, up to 20 Ah or more for an electric vehicle battery.

Advantages of Lithium Polymer Batteries
The lack of a metal can allow more flexibility to manufacture custom sizes based on the constraints of the wearable device. While internally the cells are very similar to prismatic cells (i.e. the electrodes could be made from the same manufacturing lines), the enclosure provides flexibility to more easily create new sizes. The laminate material can easily be slit to different lengths and widths as opposed to having a cylindrical or prismatic can that requires new tooling to manufacture a new can size. Also, the heat sealing process is easily modified compared to crimping for cylindrical cells. This flexibility in the size options makes Lithium polymers a great choice for wearable devices. 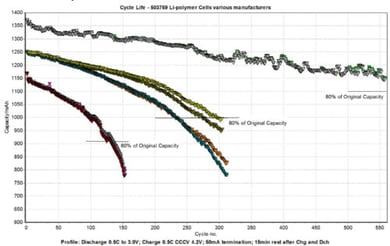 Another disadvantage of a Lithium polymer cell compared to a cylindrical cell is less volumetric energy density. This is because cylindrical cells will not bulge due to their extremely strong shape, so very high electrode densities can be achieved with metal cans. Also, the selection of materials is less restrictive because small amounts of gas produced by a cylindrical cell has no effect on its performance or shape.

he same is not true of Lithium polymer cells. However, this disadvantage in energy density can be somewhat overcome by an advantage in battery packing density owing to the lost space between cylindrical cells. Lithium polymer cells tend to have better cycle life than cylindrical cells because they are not so tightly constrained; allowing the electrodes to expand and contract more freely during cycling reduces the mechanical stress on the electrodes. Figure 3 presents a cycle life chart of a 1C charge, 1C discharge cycle life of a 2.7 Ah cell. It is still retaining 90 percent after 500 cycles. There are newer designs coming that should exceed 1,000 cycles.

Designing and Manufacturing with Lithium Polymer Cells
Special care must be made in designing the pack and handling the cells so there are no sharp objects or enclosure features that could damage the cells, either through puncture or denting of the cell. Figure 4 shows the exterior of a typical Lithium polymer cell. 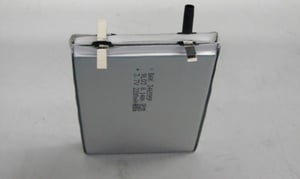 Edge shorting is another often overlooked issue when assembling cells into a battery pack. The cut edge of the laminate bag exposes the aluminum layer in the packaging, which is conductive, so if exposed it can short for example against any battery management system (BMS) component that it contacts. These issues reinforce the need for manufacturing expertise when assembling Lithium polymer cells into a battery pack or wearable device. Over-discharge damage is an issue for all Li-ion cells, but the resultant gassing in Lithium polymer cells is more obvious. When the cell voltage drops too low (~1.5 V), internal cell reactions start to produce gas. As the voltage continues to drop under 1.0 V, copper from the anode current collector starts to dissolve and can short out the cell upon recharge. Over-discharge can be limited by the battery management system (BMS) within the battery pack but diligence within the supply chain is also required to avoid self-discharge of the cells below 1.0 V.

As with all Li-ion cells, overcharge also has to be prevented. Overcharge can result in significant capacity loss even at levels just above a typical 4.2 V charge. Higher levels of over-voltage can result in safety issues as the cathode breaks down and internal cell reactions escalate into thermal runaway. There are differences in the safety mechanisms, particularly between cylindrical cells and polymer cells. Polymer cells do not have an integral pressure activated current interrupt devices (CID) as 18650s do that help prevent overcharge as the gas pressure builds. Traditionally 18650s also include internal PTCs to stop operation when high current/temperature thresholds are exceeded whereas polymer cells do not have this. This functionality can be added either with PTC or thermal fuse to the battery in combination with its safety circuit.

Lithium polymer cells offer many attractive benefits, including the ability to develop smaller, thinner medical devices and the flexibility to create a size that truly optimizes form, fit, and function of your device. However, the phrase “Buyer Beware” is never truer than when it is applied to Lithium polymer cells. The variability in quality, safety and performance require experience and diligence to ensure the standards expected of a wearable medical product are met.

This article was originally published in Battery Power Magazine, May 2015