In this Li-ion Battery 101 blog post, we'll discuss the difference between battery power and energy and how battery packs can be designed to deliver more power and/or energy to meet the application requirements and user expectations.

By definition, energy is the property of matter which enables work to be performed. When referring to electronics, energy can be stored or produced in order to operate devices. Batteries store electrical energy. The more energy that is stored, the more work that can be done. Power, on the other hand, is how quickly the energy can be used.

As an analogy, you can think of energy like water behind a dam of a hydroelectric plant (See Figure 1). This water can generate electricity as it passes through the dam. Drain the water slowly if the electricity demand is low or drain quickly if the electricity demand is high.  The demand in how quickly that energy is needed is the power. If quick energy is needed, then more power is required. To summarize, energy performs work, whereas power is how quickly that energy is used to perform the work.

Now let’s discuss a common technical question regarding how batteries are constructed when it comes to energy and power. Battery packs are comprised of cells that can be arranged in two different formats - series or parallel. Each cell in a battery pack may contain the same amount of energy and, if cells are added, the amount of available energy is increased proportionally. However, there is a significant difference in how that energy can be used in series vs. parallel.

Cells are in series when the positive end of one cell is connected to the negative end of the next cell, and this arrangement can repeat over and over again. As more cells are added in series, the electrical potential of the battery pack increases. This enables electronic devices that require higher electrical potential to operate at their required voltages. Looking back at the dam example, imagine a series arrangement as making the dam higher, so the water behind it can build strength as the water level grows (See Figure 2). With the higher water level, water released from the bottom of the dam will drain with greater force. Batteries which have cells in series, serve the same purpose in enabling more “force” (voltage) behind the electricity that is available from the battery pack. 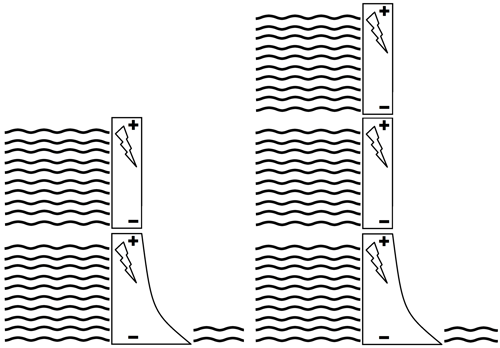 The other method that cells can be arranged in a battery pack is in parallel. Cells are connected in parallel when the positive end of a cell is connected to the positive end of an adjacent cell. Conversely, the negative ends are also connected. As more cells are connected in parallel, the available energy of the battery pack is increased while the potential strength remains the same. Looking once again at our dam analogy, cells in parallel can be compared to multiple dams adjacent to one another (See Figure 3). If each of these dams is holding water at the same level, water can be drained to enable more energy of the same potential to be released. Batteries that have cells in parallel likewise can produce more electricity of the same “force” (current) to the electronics that need it. 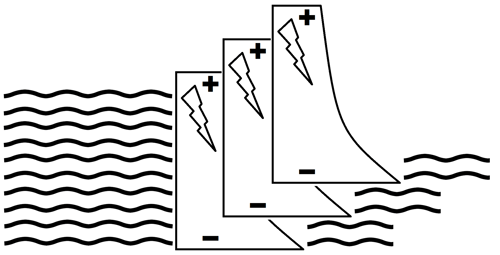 For engineers who are designing or choosing a battery pack for their application, it is important to understand the series/parallel configuration of cells within the battery pack. This is often abbreviated as x”S”y”P”, where x is the number of cells in series and y is the number of cells in parallel. For example, in Figure 2 (left side) a 2S1P battery has two cells in series, one cell's positive end connected to the other cell's negative end, for a total of two cells in the pack. Now a 3S4P battery, as in Figure 4, has three cells in series. Each of those series strings with four cells in parallel, for a total of twelve cells in the pack. 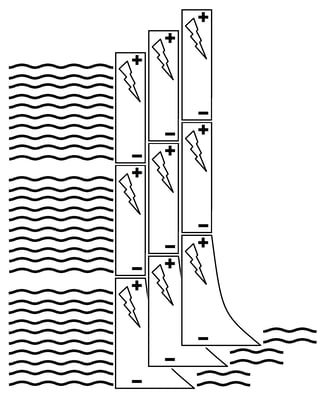 A battery pack's configuration depends on how much voltage, current, energy, and power is required for the application. Some applications require a quick burst of power to operate, such as in a power tool. Others require a steady amount of power, but enough energy to operate for longer periods of time, such as a heart pump or electric lawnmower. Inventus Power engineers address these customer requirements daily. Applications Engineers will work with customers to define these requirements before designing the battery pack. Design Engineers then consider the required cell configuration when developing the battery management system and related protection circuits. Speaking of protection circuits, our next blog article will discuss how we, at Inventus Power, keep our batteries safe. Stay tuned!