Welcome to the first post in our “Li-ion Battery 101” blog series! Today's topic answers the question, "What is a Lithium-ion (Li-ion) battery?"

According to Merriam-Webster’s Dictionary, a lithium-ion battery is “a rechargeable battery that uses lithium ions as the primary component of its electrolyte.”¹ Before we discuss further, it’s important to take a step back and explain some elements of this definition. First, we’ll start with a battery itself. Fundamentally, a battery is a container containing one or more cells in which chemical energy is converted to electrical energy (electricity) and used as a source of power. Alessandro Volta, an Italian scientist, is attributed to inventing the first true battery back in 1800, and National Battery Day commemorates his birthday.

Batteries have come a long way since Volta’s time and, over the years, improvements have been made in battery technology to make way for different types of non-rechargeable and rechargeable batteries. Non-rechargeable (primary) batteries are considered single-use and cannot be used once their energy is depleted. Rechargeable (secondary) batteries can be recharged multiple times before needing replacement; Li-ion batteries fall within this category.

When we refer back to Webster’s definition, we recall that a Li-ion battery uses lithium ions “as the primary component of its electrolyte.” But what is an electrolyte? Referencing Webster again, an electrolyte is “a nonmetallic electric conductor in which current is carried by the movement of ions.”² While it is true that the primary component of a Li-ion battery (cell) is the electrolyte, there are other components that should be mentioned – the cathode, anode, and separator.

Cathode: The cathode is the positive electrode and is the side from which the conventional current flow originates when it is coupled with a current collector or tab typically made out of Aluminum. An immense amount of cathode materials have been researched and it is typically what defines the nomenclature for the type of battery cell.

Anode: The anode is the negative electrode and is the side from which the electron current flow originates when it is coupled with a current collector or tab typically made out of Copper. The two most popular anode chemistries for Lithium-ion batteries are Carbon and Graphite.

Separator: As the name suggests, the separator separates the cathode from the anode. This prevents a short circuit or gradual self-discharge while still allowing lithium ions to flow between the anode and cathode. A failure in the separator will lead to a short circuit of the cell which may result in an over-temperature fault or simply a discharge of the cell so that it is no longer usable. 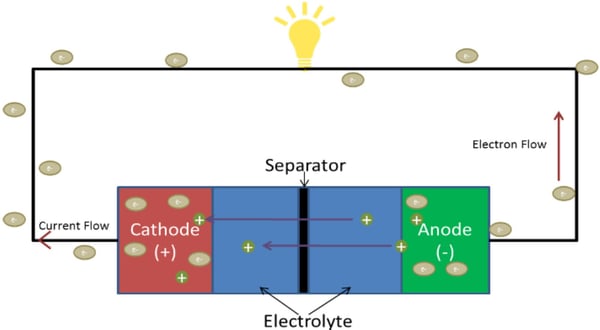 Now that we have described the main Li-ion battery cell components, let’s explain how they can be assembled. Li-ion battery cells are typically found in one of three different containers or types (Prismatic, Cylindrical, or Pouch). Prismatic or Cylindrical cells are typically made from a conductive aluminum. Pouch cells are usually made of a non-conductive material, such as plastic. Regardless of the container type, all are filled with an anode, cathode, separator, and electrolyte. The order of these components is very important because, if you remember, the anode and cathode cannot touch. Components are stacked as follows: separator, anode, separator, and then the cathode. Once stacked, the components are rolled into a “jelly roll” (that’s an official battery industry term), with the separator being on the outside. Next, the jelly roll is inserted into a container and filled with the electrolyte. 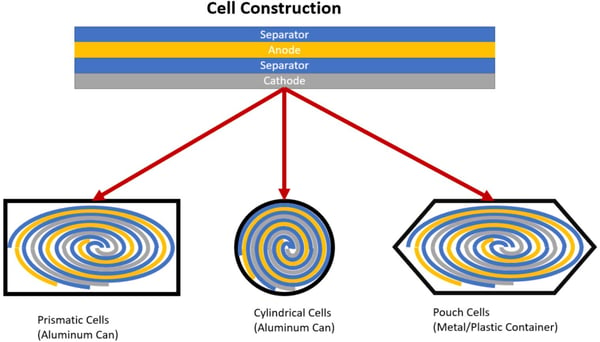 Now that you have learned how a Li-ion battery cell is constructed, we can explain how a Li-ion battery creates power. This is done when the electrolyte facilitates an electrochemical reaction between the two metals (anode & cathode) and allows ions to flow from one side to the other depending on if the battery is charging or discharging. To help understand this concept better, let’s consider the following analogy. Imagine that you and your family members are the “ions”. The inside of your house is the cathode and the outside of your house is the anode. The air acts like the “electrolyte” and the door plays the role of “separator”. When you and your family are outside of your house, you expel energy to perform work. When ions are on the anode side, they are using their energy to perform a task and are in a state of discharge. When you and your family need to recharge from the day’s activities, you go into your house to relax and rebuild your energy. You enter your house through the door. This is similar to when ions flow through the separator to enter the cathode side of the cell to recharge.

What is also important to understand in this example is that charging takes place only on the cathode side and discharging only takes place on the anode side. You and your family do not rest outside overnight because you would not be protected from the elements. Li-ion batteries do not charge in the reverse as it would not be safe. We will talk more about lithium-ion battery safety later in this blog series.

Hopefully, you have learned something new about lithium-ion batteries. Please note that much of the discussion was focused on Li-ion batteries at the cell level, as these cells are the basic building blocks for Li-ion battery packs, which can consist of one or more cells and other components. In an upcoming Li-ion Battery 101 blog post, we'll examine the construction of a Li-ion battery pack.

Home > Inventus Power Blog > What is a Li-ion Battery?